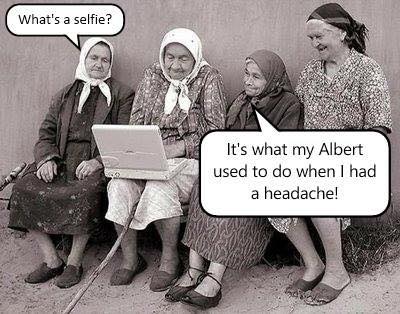 Before we go scoffing and rolling our eyes too loudly when it comes to mustering the patience for showing an ageing parent how to “logger” themselves onto a recently erected PC, iPad or tablet device, consider this:

—–> Your mother taught you how to hold a spoon, wipe your bottom and count to ten.

Did she poke fun at you then?

Or, when a grandparent who is desperately trying to master the art of “this emailer caper” just so she can stay in touch with her grandkids (yes, your children)… because nobody writes letters anymore and rather than being left behind and feeling cut-off from her family, she is at least making the effort to come to grips with all this “technical gadgetry” even though it is completely foreign, slightly intimidating and it just feels so damned impersonal to her.

And isn’t it just gorgeous (we try not to patronise) when she announces how mod and trendy she must be when she FINALLY manages to “pop off an email” to her darling 10 year old grandson, Max. It’s only taken her most of a day but she persevered and got there in the end.

Although, whether or not little Maxi actually received the email is a different story!

“Or was that the SAVE button… “

And then now that she’s so proficient and computer savvy, she even remembers to sign off with “LOL from Grandma” just for effect… because that’s Lots of Love, naturally!

You have to admire her for being so plucky and at least giving it a go, don’t you?

“Oh, Maxi will be SO impressed to see how his grandmother knows “dot com stuff!”

More and more it seems I’m getting asked by some very frowny-faced clients when I arrive at their homes, if I could please have a look at their jammed-up, unresponsive computers or merely to explain what “that funny noise” means and how “it only started making it after that dreadful storm yesterday”.

“Do you think perhaps some water got into the wiring, Dollie?”

That the “inter-web must be broken” or “I think I’ve broken Google” after accidentally deleting all the desktop icons. Or asking if one needed to locate an ‘App’ i order to bring up the local bus timetable. Or wondering why “my internet is so slow and it won’t let me start typing anything in”… only to discover one poor soul had inadvertently opened over 30 windows and had 14 tool bars running!!

“Would it be easier if I hopped on to ‘The Twitter’ instead, Dollie?”

In my experience (and being that it would be totally inhumane and nasty), there is no merit gained from sniggering into the face of an earnest older person who is already feeling inadequate.  They understand and accept that all this new whizz-bang technology is completely over their head and that of course they know how ridiculous they must look to us younger smarty-pant types.

Instead, I sit down, and LISTEN to what they are trying to achieve and if it sounds like something basic (such as the ever-popular ‘not being turned on at the wall’), then I tactfully suggest we try giving the switch a flick and see how that goes.

“Oh, it happens all the time, Mrs Terrabyte, no need to feel embarrassed.  In fact, I sometimes do the same thing myself!”

And then we laugh. Until she reveals for the life of her she can’t remember what her wretched password is… and could she use mine instead?

So here’s a cute little poem I found “on the line” that suits the occasion and ends very nicely too.

Of course in real life, we would never wish to lose dear ol’ Grannie into the deep dark depths of the cyberspace abyss (or have her gobbled up by a worm) in a million years.

Who else is gonna tell us what cupboard she hides the ‘cookies’ in… tee hee!!

Really, it’s of little surprise that many of the older adults I visit in their homes, enjoy listening to their radios.

More specifically, those with deteriorating vision or being that they might be frail or unwell (with mobility often compromised), they can find themselves in their late ‘golden years’, no longer able to indulge in traditional media entertainment pleasures the rest of us hipsters take for granted.

Vices such as watching television, reading a good book or wallowing for half a day with toast & coffee over the Sunday paper is simply no longer an option.

Not that they are missing much, surely? It seems telly these days is unrelenting with it’s bombardment of rubbish ‘reality’ shows targeted solely towards the younger more impressionable audience, thereby leaving bewildered seniors often unable to relate and feeling overwhelmed at such bad taste and a definite absence of depth.

Instead, having a nice string of yesteryear tunes crooning away on the radiogram in the front room, works beautifully to lift sullen moods and put some zing into a lonely or sometimes socially isolated pensioner’s day.  Memories of happy, more sprightly-er times are jogged by meaningful classics, as well as offering the much needed ‘company’ my clients might now be lacking.

“Hearing Vera Lynn always reminds me of my Edith and the times we used to sit in the back of the truck on our way to the dance at the town hall. Drinking home-made cider we’d nicked from my dad’s basement… we felt sooo naughty”

“…but naughty in a good way, Dollie!”

Talkback radio too, is ideal for supporting a forlorn or neglected senior through long periods of solitude and that despairing, yet understandable need for human interaction. They get to stay fully up to speed with the latest news and current affairs of the nation (usually in the middle of the night when they can’t sleep) plus share opinions and views with people of the same ilk.

“And, it’s great fun arguing the next day with Mavis and Lettie about the previous night’s topic.  Can really get the blood churning – because I’m always RIGHT of course!”

Similarly, for some of my older gents who adore (and can’t live without) their daily infusion of Sport.  Sadly though, thanks to medical conditions and the sheer exhaustion of it all, many have had to give up attending actual LIVE football games or cricket matches.

To quote dear old 97-year old Bert with ‘a gammy leg and both me dicky knees’:

“The logistics alone would just about kill me, Dollie!”

Instead, he attaches himself to his little black transistor (circa 1972) via a pair of well-used nicotine-stained earplugs and lies back in his armchair to bellow at “that frigging umpire” until he nods off with the excitement of it all.

I have to say now (in a big loud voice), earplugs or headphones are a superbly handy device for a lot of the hearing-impaired people I come across.  Needless to say, they’re also a godsend for a spouse (or a budgerigar) who otherwise gets stuck tolerating the din!

“Jeee-zuz, Ref…my wife’s gotten pregnant from less contact than that!”

However… as marvellous and New-Age as all that is, I have other dear clients whom I help in their home, who can’t manage their broadcast transmissions to save themselves!

And it doesn’t matter how ludicrously large the knobs on their radios are, or how basic the design or how seemingly straightforward the technology is to operate… THEY WILL STILL FIND A WAY TO STUFF UP THE SETTINGS!

Today for example, I arrived at 87-year old Bill Whistley’s home and as I walked up the path, I was hit with an adorable Guns & Roses melody ‘Sweet Child of Mine’ booming off the Richter scale and making the crockery in Bill’s glass cabinet rattle.

“Blimmen ‘eck, I’ve tried fiddling with it, Dollie… but since I started my new pills, I’ve lost the feeling in my hands a bit. Can’t seem to land it on anything except THAT goddam racket.”

And in all the fluster, poor ol’ Bill decided to deal with the ear-splitting screams of Axel Rose the only way he knew how – by shutting all the doors and stowing himself away in his spare room.  It never occurred to him to just switch his radio off at the wall!

Yet Bill is not alone with this terror of the airwaves!  I’ve lost count the number of times I’ve walked into my client’s homes (I give up knocking as there’s literally NO CHANCE they can hear me) to find a brilliant selection of Hard Rock or Heavy Metal booming from within.

Dollie to the rescue – check out some of these pearlers!

“My house is so quiet during the daytime… it’s just nice to have something break the silence.  Mind you, be good if it were something I could whistle to”

(You mean you CAN’T whistle to Spiderbaits’ toe-tapping version of ‘Black Betty’?)

“Oh the damn thing has a mind of its own. I set it on a nice bit of Sinatra but the next day it’s somehow flicked itself over and I’m left with that lot screeching at me!”

“Oh is it, Dollie? I hadn’t noticed… I thought I was listening to Roger Whittaker!”

“My son will be here later, I thought I’d leave it for him to sort out. Didn’t want to meddle in case I broke something. Plus it means I get to see him more often”

(Led Zeppelin at brekky time for a ‘Whole Lotta Love’)

“To be honest, Dollie… I’m deaf as a post so ANY noise is good”

“What’s FM then? I thought it said ‘AM’ and ‘PM’. So I’ve been switching the dial once I’ve had my lunch, over to the ‘PM’ for the afternoon session. Wondered why the tunes suddenly got a bit rowdy!”

“It’s been begging for a fight all morning… I’d turn the dam contraption off if I knew how!”

(Yes, ‘Sexual Healing’ – always good for a bit of rough’n’tumble)

(who DIDN’T get their kids to sleep with that lovely ‘Smoke on the Water’ lullaby?)

Let’s face it, as some smarty-pants from somewhere once said:  “RADIO:  It’s like TV, only the pictures are better”.

Which is all very well and good – but it doesn’t really explain why I seem to be forever having to adjust my clients’ knobs !!!