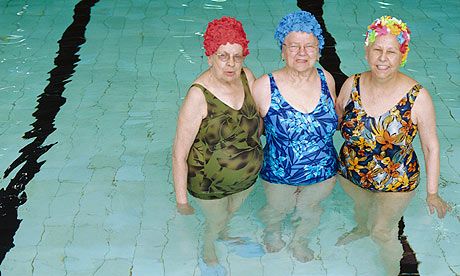 Every day, our delightful neighbour Lettie-from-over-the-road, walks outside her front door, slowly down the steps and across the driveway to collect her newspaper from wherever it has landed on her front lawn.  It’s usually in the same spot every morning, give or take, depending if the delivery boy gets his projectile right and doesn’t instead end up riding his bike into the bushes!

(Three years on, you’d think he’d have this sorted by now).

On her way back towards the house, with mission accomplished and with paper stuffed purposefully under the wing of her arm, Lettie then likes to pause and glance over the neighbourhood.  She pretends to pick a bit of dead something off the Hydrangea bush at the bottom of her steps, then ambles cautiously back inside to (most likely) put her feet up from a job well done.

But it’s just painstaking to see!

Nearing 94-years old, living alone and with seriously swollen ankles from kidney disease, ‘a bit of the diabetes’ and being almost totally blind thanks to advanced macular degeneration, Lettie has slowed down significantly in the last couple of years.

We know this because we have quite literally witnessed the progressive decline in Lettie’s mobility thanks to our lounge room windows facing directly opposite hers.

Needless to say, you can pretty much set your clock to Lettie’s daily paper pick-up ritual.  Unfolding before us almost like a big-screen movie, we get to watch all Lettie’s comings and goings – as she does ours. Which is actually kind of nice being that it offers a warm fuzzy familiar feeling to let you know all is right with the world.

But that doesn’t make it any easier to watch!

“Once I’ve had my weeties and taken all my tablets, it’s time to do the morning dash!”

Ummm, less of a DASH… more of an action replay stuck in serious slow-motion?!  Thankfully, Lettie enjoys joking that it takes her sooooo long and that tomorrow morning she’s thinking about packing a picnic lunch and making a day of it.

“I’ve got all day – may’s well take a cream bun and enjoy myself at the half-way mark!”

Awkwardly steering her wheelie-walker to the top step, our hearts are in our mouths as her front wheels teeter close to the edge. Applying the brakes, just in the nick of time, Lettie then grapples her way down the steps in lunging fashion, by means of the metal railing installed by her family a few years back.

She then shuffles… barely lifting her puffy, slippered feet… across the driveway to the edge of the lawn where she then stops, statue-still with hands on hips, to peer at the grassy expanse before her.

Eventually, depending on the angle of the sun and the landing position of the newspaper on any given day, Lettie is usually able to perceive enough colour contrast to make approximate visual contact with her printed prize.

However… if the paper has made touch-down on the driveway instead of the lawn, poor legally-blind Lettie has NO CHANCE of finding it!

As I guilefully explain to my pre-teen son, the grey-ness of the concrete doesn’t make the off-white coloured newspaper ‘pop’ like the bright green-ness of the grass does.

Lettie then ambles her way across the lawn and upon reaching her quest, snap-bends in half to scoop up the cellophane-sealed roll in a one-motion move. Turning stiffly, she then pauses to gaze at the street around her (more to have a rest than to actually ‘look’ at anything), before tottering her way back onto the driveway, then slowwwwwwly on towards the front steps.

It can be a good 20 minutes by the time Lettie has hauled herself up the steps to the security of her wheelie-walker at the front door, during which time I have hung out a load of washing, ironed the school uniforms, yelled at the kids and fed the cat!

My enthralled son can stand watching this senior’s snail-paced performance NO LONGER.

“Oh no, absolutely NOT, my child!”

Then, chuffed that I get to impart my Aged-Carer’s industry knowledge on somebody (anybody will do) I then proceed to explain that as long as Lettie is able to collect her newspaper for herself – then let her, WE MUST.

And that regardless of Lettie’s diminished eyesight and her age-related health issues, it was important for Lettie, if she wanted to remain living independently in her own house, that she be able to do boring household chores such as this…

I also knew, from conversations with her daughter Sue, that Lettie had very little other physical activity going on in her day.  Sue, therefore, felt it crucial that her mother be encouraged to continue this one daily routine, this one small piece of exertion, in order to keep blood flowing, muscles moving, her mind stimulated and hopefully result in a much better quality of life for Lettie all round.

In the meantime, Lettie gets to exist alone at home feeling good about herself; to know she’s maintaining independence, her self-respect and the satisfaction that she still (mostly) have control over her own future.

And that’s a really super important thing when you’re an elderly person, as I explained to my son (who oddly, has always been quite fascinated with Lettie’s activities).

“But what does she want a paper for anyway… I thought she was BLIND????”

I remember at the time staring blankly at Junior aware that with this last line of inquiry, he had actually stated the ‘blindingly’ obvious.  And as the wave of realisation washed over me… I thought it might be a good idea to give Sue a call for a bit of a chat.

“Nobody likes a smarty-pants, darling.  Go let the cat out!”

3 thoughts on “Letting Lettie Do It!”